Another fun way to waste a day or 2.

Lately it seems that more and more people, especially teenagers, are getting involved in online gaming.

Now that the Xbox® and PlayStation® have been using the Ethernet adaptors to enable online live real-time action games.

Now not only can I get beat by the computer it seems I can also get beat by a 4 year boy probably on the other end of the US. “SOCOM navy seals” and “Ghost Recon” seem to be favourites. (Correction to this on 3-26-2004 Ghost Recon does not play online) 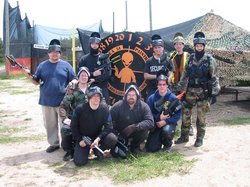 Here are some pictures of a lot too long ago paintball gathering. We had a great time. What an awesome way to spend a nice day outside shooting other people and getting shot back at.

This game is awesome. Not only do you get to choose the time period of battle but also the side. Be it Imperial vrs. the Rebellion or the CIS against the Rebel . This game rocks.

You can play anywhere in the city do anything or nothing. Sound great.

Way of the Samurai

Wow, the detail and the music on this game are awesome. Some of the time I wish they mould just speak the dialogue though as reading the dialogue all the time in the game mode can be annoying. Another peeve of mine is they make you earn the right to unlock the battle mode. Hey I paid for this game (event it was on sale for under 20 bucks at Walmart) I would like to play two player right off the bat. But any way Ion was over and play it in game mode till he unlocked it. Now let the battle commence.

Tom Clancy’s – Ghost Recon
Here is a good cheat code for all you Ghost out there. while in the mission pause the game then hit L1 R2 L2 R1 Select. This will give you unlimited ammo and invincibility.(Superman powers)